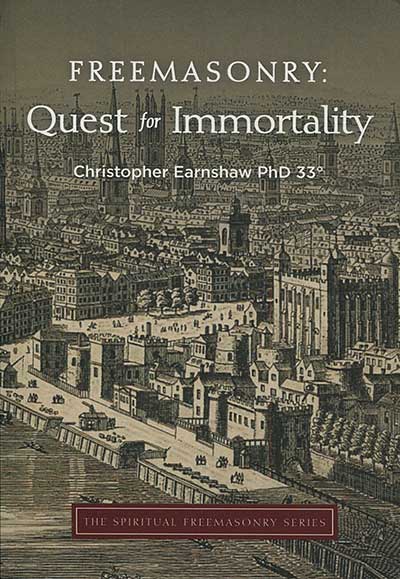 “Freemasonry: Quest for Immortality” by Christopher Earnshaw, PhD, 33°. Reviewed by Cathy Giaimo, Librarian, The Masonic Library and Museum of Pennsylvania.

“Freemasonry: Quest for Immortality” searches for the reasons the first two degrees were rewritten and expanded by the first three Grand Masters of the Grand Lodge of England after 1717 and for the addition of the Third Degree to Masonic ritual. Brother Dr. Earnshaw asks questions about the relationship between the story of Hiram Abiff and the “Tree of Life” found in the Kabbalah; why atheists are despised in Freemasonry but Catholics welcomed; and why medieval mystery plays play an important part in the development of the Third Degree. These are just a few of questions the author seeks to answer.

In order to better understand how Freemasonry evolved and developed in the early 18th century, Bro. Earnshaw devotes quite a bit of the book to English history during the prior 400 years — explaining the political, social and religious turmoil facing England and its citizens. It is the author’s view that though Freemasonry now accepts all religious beliefs, the degrees were deliberately developed with a Christian influence. This was the era when learned people knew the Bible and studied it, as well as Greek and Latin. The English Enlightenment was flowering during this period and its influence was being felt.

Brother Earnshaw concludes the book, like any good Freemason, with a look at 21st century Freemasonry and what it is lacking in this day and age and what can be done about it.