Founded in 1908, the Museum was dedicated by Brother John Wanamaker, a prominent Philadelphia merchant who served as the first Chairman of the Library Committee. The Museum’s collection consists of more than 30,000 items. Some of these include Brother George Washington’s Masonic Apron, embroidered by Madame Lafayette, which was presented to the Grand Lodge of Pennsylvania in 1829 by the Washington Benevolent Society; two letters in Washington’s own hand addressed to his Masonic brethren; Brother Benjamin Franklin’s Masonic Sash, worn in 1782, when he was Venerable (Worshipful Master) of the Loge des Neuf Soeurs (Lodge of the Nine Sisters or Muses) in Paris, and when he Guided Brother Voltaire.

Origin and Value of Masonic Artifacts

As a general policy, we can only do minimal research on Masonic artifacts and paraphernalia. There are many fine pieces of Masonic regalia, jewelry, artwork, China, furniture, medallions and commemorative gifts. There are also many items of great sentimental value, but which have no intrinsic worth. The Masonic Library and Museum is not in the market to purchase or broker the sale of Masonic artifacts. Further, we are not permitted to provide an appraisal service on such items, whether for sale or given as gifts to the Masonic Library and Museum. Antique dealers are best equipped to serve these needs.

If you simply desire to return Masonic regalia such as swords, Past Master jewels, aprons or other items to the originating Masonic organization, we can put you in touch with the appropriate official. Please understand that, as a rule, these items will not be purchased, but will gladly be received for their sentimental value.

Occasionally, pieces of extreme rarity and historical significance are acquired for our collections. It is difficult, and nearly impossible, to research information on most of these items without visual examination. If you feel that you have an item which would be of interest to us, please forward a color photograph to us via the contact information found at the bottom of this page.

Treasures of the Museum

This Masonic apron was one of two owned by Brother George Washington. When the young Marquis de Lafayette came to America at the age of 20 and joined George Washington’s army for the Battle of Brandywine in 1777, the American cause had become his cause.

The affection each man held for the other is legendary. So, too, is the legacy of Masonic history developed through that affection. For many years, Masons and non-Masons believed that the white silk apron known as the Lafayette Apron had been embroidered by Madame Lafayette and presented to Brother George Washington by Brother Lafayette in August of 1784. This cannot be documented as fact. It has, however, been ascertained that the apron did indeed belong to Brother Washington, and current research suggests that it was made in China.

The apron was presented to the Grand Lodge of Pennsylvania by the Washington Benevolent Society on July 3, 1829, and is now on display in the Grand Lodge Museum at the Masonic Temple in Philadelphia. It is a study in symbolism. For example, the apron border colors of red, white and blue are the national colors of both the United States and France.

In preparing the following, the late Brother Frank W. Bobb, Grand Lodge Librarian and Curator, has used those meanings most widely accepted by Masonic scholars in interpreting the symbolism of the Washington Apron. 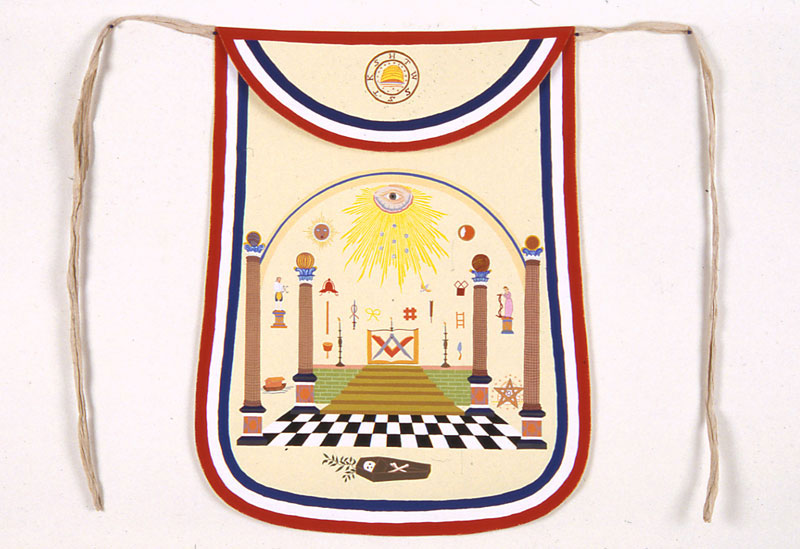 Architecture of the Museum

The architecture and decorations of the Museum room are intricate Byzantine. Virtues obtained from education are illustrated by the inscriptions on the frieze and by the 20 allegorical figures. Those Latin inscriptions are: “Quodcumque facere potest manus tua, instanter operare; quia nec opus, nec ratio, nec sapientia, nec scientia erunt apud inferos, quo tu properas. Ecclesiastes Cap. IX 10” (Whatsoever, thy hand findest to do, do it with thy might; for there is no work, nor device, nor knowledge, nor wisdom in the grave, whither thou goest.-Ecclesiastes, 9 : 10). “Sola perpetuo manent, subjecta nulli, mentis atque animi bona. Seneca. Oct. 548.” (The virtues of the mind and soul, subject to no one, alone remain forever. –Seneca, Octavia, 548). “Viamque insiste domandi, dum faciles animi juvenum, dum mobilis aetas. Virgilius G. III.164” (Begin early the course of education, while the mind is pliant and age is flexible.–Vergil, Georgics, 3, 164).

On the north wall of the Museum are the departments of human knowledge. Medicine: Aesculapius, the ancient Greek physician, sits teaching the science of medicine to the coming generations. Philosophy rests with her hand to her brow, trying to fathom the riddle propounded by the sphinx. Poetry: a young poetess gazing abstractedly, seeks the right word to write upon her scroll. History: Memory in the form of an old chronicler searches in the Book of History for the records of a bygone time. Astronomy is depicted by the first astronomers, the Persian and the Arab, measuring the distance of the stars. Mathematics stands musing upon the geometric principles of the triangle in his hand.

Figures on the south wall show the sources of natural happiness: Charity gives a drink to a wounded soldier supported on the arm of his comrade. Peace holds a green branch signifying plentiful crops. A child is at her knee; she wears a helmet and carries a sword to defend and preserve these blessings. Industry holds a wheel and has an axe beside her. Internal Trade is represented by an Oriental merchant. International Commerce considers the model of a ship. Reflection or Meditation gazes at a human skull.

On the east wall, Rome sits erect and ready with helmet, spear and shield. Her foot is on the globe, signifying that she rules the world. Alexandria, named by Alexander the Great, whose bust is in the background, is elaborately dressed, symbolizing the Oriental luxury of that city. The book reminds us that Alexandria once had the greatest library in the world. Corinth is seated on a Corinthian capital. Behind her is the winged horse, Pegasus, who was supposed to carry thoughts to heaven. Corinth holds an olive branch to crown the victorious athlete at the Isthmian Games. Athens is symbolized by the goddess Minerva (Athena). Her signs are the owl, the breastplate and the Gorgon shield which turned the beholder to stone. In the background is the statue of a philosopher to show that Athens was the “mother of art and eloquence.”

The symbolized cities continue on the west wall. Byzantium, heir and successor to Rome, holds the orb and scepter of the empire. She guards it well so that the power will pass to the young and vigorous races of Europe. Ravenna, the Gothic imperial city, received and disseminated in Italy the learning of the perishing Byzantine Empire. Her costumes are rich with the jewels of learning. She wears a crown of authority and holds the horn of plenty.

In the other division of the west wall, over the entrance, are symbols of two of the great principles of Freemasonry. Fidelity has a wand entwined with ivy in one hand, grasping an evergreen branch in the other. She is guarded by a Saint Bernard dog, the breed that is trained to search for perishing travelers in the Alpine snows. Virtue holds the shield of Purity and the sword of Courage. Beside her is crouched the lion of Fortitude and Strength of Character.